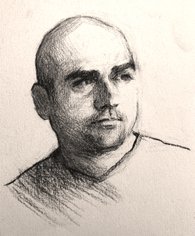 Marsel Nichan is a versatile composer living in Stockholm. As a composer, Marsel constantly balances between several sources of cultural inspiration. In that sense, he is a time-typical representative of a growing composer generation that is increasingly being influenced - impressions / expressions - from a multicultural society. For Marsel personally, this complex diversity is not formed into separate incidents or decorative splashes of color, but rather a sort of artistic wholeness, an insoluble composite or alloy. Today's expansive soundscape provides a treasure trove for his creation, a constant source of inspiration and renewal.

Marsel Nichan's music is dramatic - for him, all the elements of the music are equally important. He believes that it ́s in that way he can create a holistic picture of what he wants to express with his music. Among his works you will find compositions for both solo instruments and various sizes of chamber ensembles. Large orchestral works, works for choir, film music and electroacoustic music. Marsel also have a strong passion for interdisciplinary projects which he works often with.

In 2006 Marsel finished his music composition studies and received a bachelor ́s degree in musicology with a focus on contemporary music. But his composition studies started already early in the music school when he was 16 years old and when he turned 17, he got his first piece performed professionally with a positive review in DN (national media). He also studied Electroacoustic music composition in Växjö for Anders Blomqvist in 2005 and in Stockholm at EMS (Elektronmusikstudion) in 2009. During 2013/2014 he studied for Mika Eichenholz (Master Class in conducting). Other teachers/mentors that he has studied for is Ladis Müller, Thomas Liljeholm and Svante Widén.

Marsel was chosen as the composer in residence in 2020/2021 with the ensemble Kwartludium in Poland (The programme is run by the Swedish Arts Grants Committee). He got also funding from the Promotion of Culture Fund from The Minister of Culture, National heritage and sport in Poland for a new commisiond piece by Kwartludium in 2022.